Transportation service sector is one of the dominant sectors of national economy. Efficiency and performance of this sector greatly depends on the conditions of physical infrastructure and transport management. The division of ministry of physical infrastructure and transport are located within the Ministry and manned by the Joint Secretaries, Under Secretaries, Engineers, Section Officers and other supporting staffs. Some of the divisions are Administration Division, Foreign Aid and Quality Standards Division, Planning Monitoring and Evaluation Division, Work and Transport Division. Some of the departments and institutions under ministry are Department of Roads, Department of Transport Management, Department of Railways, Road Board Nepal and Nepal Engineering Council.

The government has allocated fund for Provincial and Local Road Construction and Improvement Program (PLRCIP) SINCE the Fiscal Year 2076-2077 (FY 2020/21). Ministry of Federal Affairs and General Administration (MoFAGA) and Department of Local Infrastructure (DOLI) are the implement partners. The key activities of the project are construction of one selected alignment to paved standard of all 283 LG centres that are yet to be connected, construction shall include natural crossings for due interconnection of Local-level administrative centres with national and provincial road networks year around, converting of all Fair-weather (no engineered) roads into all-weather (engineered) roads in a phased manner, internalize improvement of roads with inclusion of maintenance as the integral part and reduce technical and managerial capacity gaps of local levels.

Source: Ministry of Physical Infrastructure  and Transport, 2021  * Till mid-March

Source: Ministry of Physical Infrastructure  and Transport, 2021  * Till mid-March

As of mid-March 2021, a total of 63,577 kilometers of roads including blacktop, gravel and fair weather were constructed at the province and local levels. Of the total road construction, Bagmati province has the highest 24.7 percent and Karnali province the lowest 5.1 percent. The density of road in Bagmati province is highest whereas it is the lowest in Province 2. 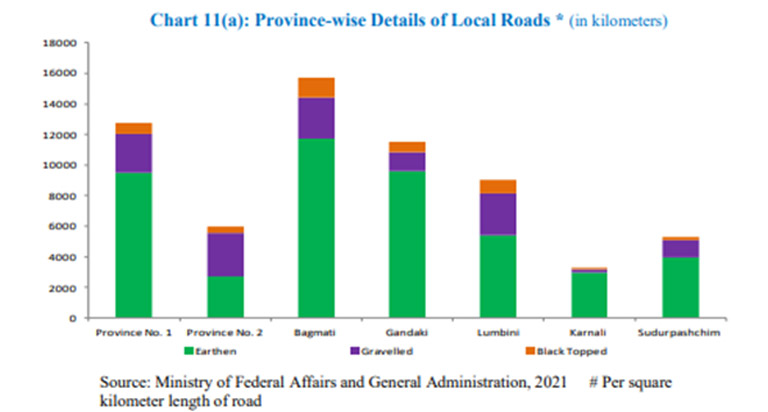 Details of Roads Constructed by Province and Local Levels (in kilometers)

Source: Ministry of Federal Affairs and General Administration, 2021 *Till mid-March 2021


Of the total registered vehicles, bus, an important medium of public transportation is 1.4 percent and the share of two – wheeler motorcycles are 79.3 percent.